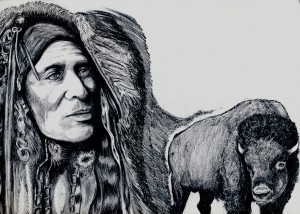 Thunder Chief- was born in 1843, on lands that would be known as the Blood Reserve the son of the original Thunder Chief and Hitting Woman. His parents were recognized as a very spiritual and traditional family. Every year during the early summer months, the Blood Tribe prepared the Sun Dance camp near the base of the Belly Buttes, their annual spiritual celebration. The encampment is comprised of several societies with each function dependant upon one another with its members learning about the societies and its rapport with nature.

In the era of Thunder Chief, the elder, the Kainai-the Blood People-roamed the prairie of what is now southern Alberta and northern Montana. The governing system was democratic, with the use of ritual and tradition that demonstrated organization and order within a tribe. Sacred societies played an important part in daily activities. Traditional values and beliefs had worth and importance, woven into a way-of-life.

In the era of Ksiitsikominaa -Thunder Chief, the younger-the Blackfoot were fully immersed in the use of the horse, that in a few decades rapidly increased their mobility, but also contributed to the animal as a value, increasing warfare and raids among the tribes. In his time, contact with and the arrival of Euro-Americans to Indian territory brought settlement, Christian religion and the appearance of military and police force. The Blood Tribe and surrounding tribes were rendered powerless and subject to domination, through aggression and coercion with attempts of removal on political, social, and religious freedom.

As a very strong and powerful man, the demeanor of Ksiitsikominaa was that of the warrior. During skirmishes, Thunder Chief and his horse were said to be invisible to the enemy, but able to be seen by his fellow Blood comrades. This ability benefited war raids, and he was undefeated, his emblem was his war-horse painted with white dots signifying hailstones.

He counted coup against the Cree in combat at the Belly (Oldman) River on October 27, 1870. This conflict, the last great inter-tribal skirmish in North America, occurred in what is known as Indian Battle Park, near where Fort Whoop-Up National Historic Site stands today like that entailed counting coup on many of the Blood enemies for the protection of his clan or people.

Ksiitsikominaa was known for his dual role as a Chief and War Chief, leading the All Black Faces Clan at the north-end of the Blood Reserve, as their lands were known following the repercussions of the signing of Treaty Number Seven 7 in 1877 at the Blackfoot Crossing.

Before the Treaty, the whisky and fur trade altered traditional concepts and ideals. After the Treaty, assimilation and colonization brought conformity to a government Reserve, residential schools, and the Department of Indian Affairs. The idea or scheme was to disempower tribesmen and warriors through attacking traditional, religion, and cultural practices.

A Reserve is a strip of land set apart by the government for the use of Blood Tribe people. The government coerced hunters into becoming farmers, and introduced restrictive laws. Divorced from their cultural connection with the buffalo, the Bloods, along with surrounding tribesmen were ultimately conformed into situations of immobility, starvation, and poverty.

The mystical power and spirituality of Ksiitsikominaa was legendary, preserving spiritual and cultural aspects in a changing society. He was one of the most influential warriors of the Kainai, enhanced with his remarkable ability to communicate with Thunder.

Ksiitsikominaa had certain capabilities and one was his mystical power of healing, and he maintained devotion to curing and caring for his people. But there was an attachment to his gift of healing-he was not able to look at a deceased body. In the day of Thunder Chief, it was not out of the ordinary to hear a talking animal or spirit-this source was an act of purity in beliefs, strength, and faith in religion-which meant a powerful and uncontaminated way of communication between traditionalists and the spirit world.

On his spiritual journey, Ksiitsikominaa owned the Back-Side-To-Fire pipe, from which he attained his power from the spirit beings, and his recognized legacy became known. A component before going on a war raid was to go on a vision quest, where seeing a vision is the act or power to see the universe in its purest form. Part of the ritual is fasting, praying to the creator or spirit beings. This tradition is significant to achieving a humble way of life and trained to become whole with oneself, the universe, and obtaining super natural powers. The powers were given through dreams, isolation, fasting, and prayer resulting in gifts given as traditional bundles.

The condition to getting his power became reality – Ksiitsikominaa’s brother had died and because they were close, he went to say good-bye. Exactly four days later, Ksiitsikominaa died. Thunder Chief was buried at the north-end of the Blood Reserve known as the community of Old Agency, a historical landmark on the Blood Reserve. He wished to be lain to rest there, among his clan so that he could guard and comfort them even in death.